An old Mercedes Benz Hippiebus is the rolling home of Jord from the Netherlands. As a traveling tattoo artist he earns money „on the road“.

Can you tell me a bit about you and how did you end up living this lifestyle?

I lived with my (then) girlfriend in a 2 bedroom house, with garden, little shed, cellar, attic, everything a „normal house“ has. But we found out that we hardly use any of this space.

A lot of the space was mostly used to store stuff we never used. So when we got back from a big trip where we rented our house for half a year, the idea of living temporarily in a van began, at least until we got our house back.

We searched for a van and found one which needed a lot of work. The van was only metal outside and an engine. The whole interior was removed, even the windows.

After a couple of months we broke up and I worked furiously for a year to finish the van in order to live in. Since I didn’t need a whole house and love to travel, the two added up.

I picked a date, sold everything i had, quit everything and jumped in to the unknown. 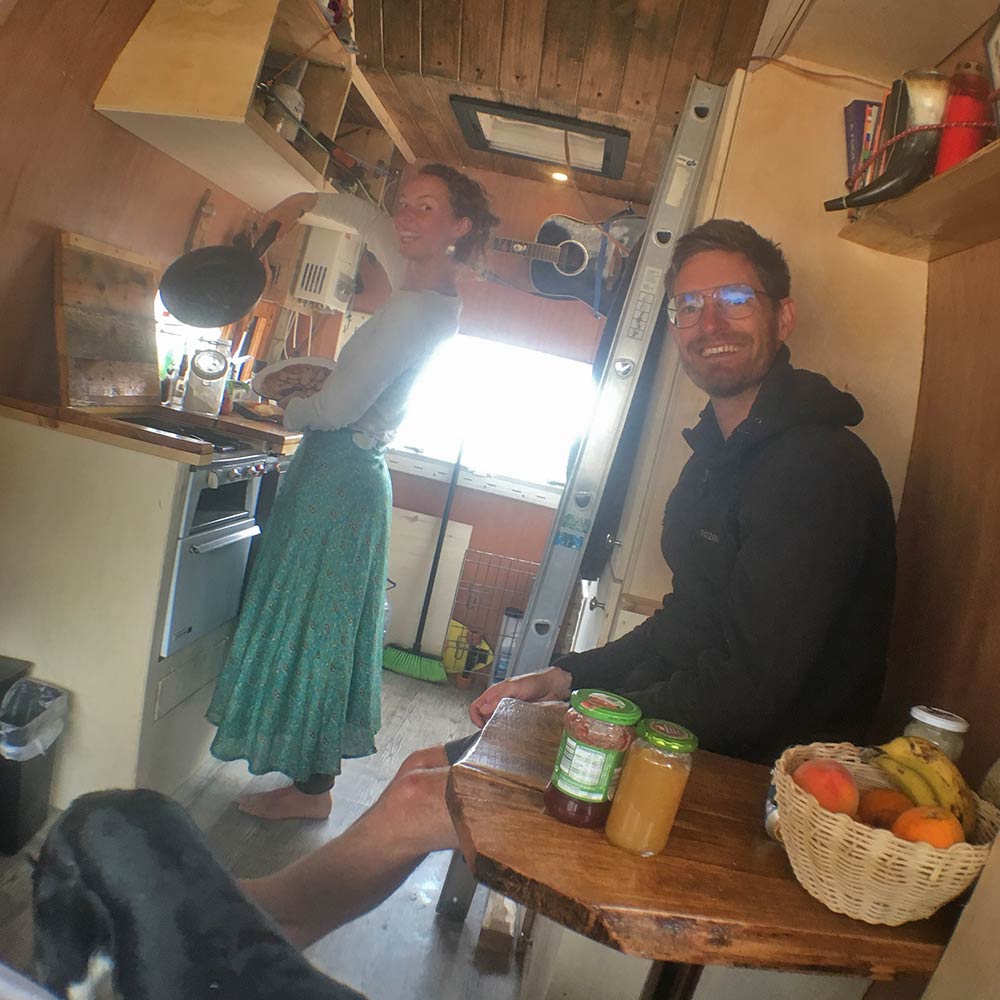 Why exactly did you choose the Hippiebus and not a smaller or bigger one?

We wanted to have a van which was wide enough to fit a bed, but small enough to park everywhere.

That and the Dusseldorfer Hippiebus, also called „dubbelluchter“ in Dutch, has a very loyal and enthusiastic fanbase. So all our questions would easily be answered on the internet.

Also, this van can be found everywhere in the world. So when there is problems, finding parts for it wouldn’t be very hard. And I was told that these motors are indestructible!

Where there any barriers while purchasing the vehicle??

Since it didn’t have windows or seats and because it was not tuv approved yet, it was impossible to drive the van. So we had to get it send on the back of a truck to get it.

And then we needed to find a spot where we could park it, because we couldn’t park it on the street (in the Netherlands you can’t park your vehicle in public when it is suspended).

It took us four months to get the van ready to park on the streets in our town!

Did you work anything on your Hippiebus yourself or did you get a carpenter?

I did everything in the van myself. I did get a little help with the electricity from some friends who work with electrics. Just to make sure I was not going to build something that would end up killing me.

I didn’t know anything about the subject, I had minimal carpeting skills, but I am a very eager learner. Thanks to youtube and the forum, I managed to fix and build everything on my own.

During the first month of living in the van however, I found out most of the mistakes I made in the build.

After 2 weeks of living in the van, my bed collapsed in the middel of the night. The bed now is twice as strong as it should be though. 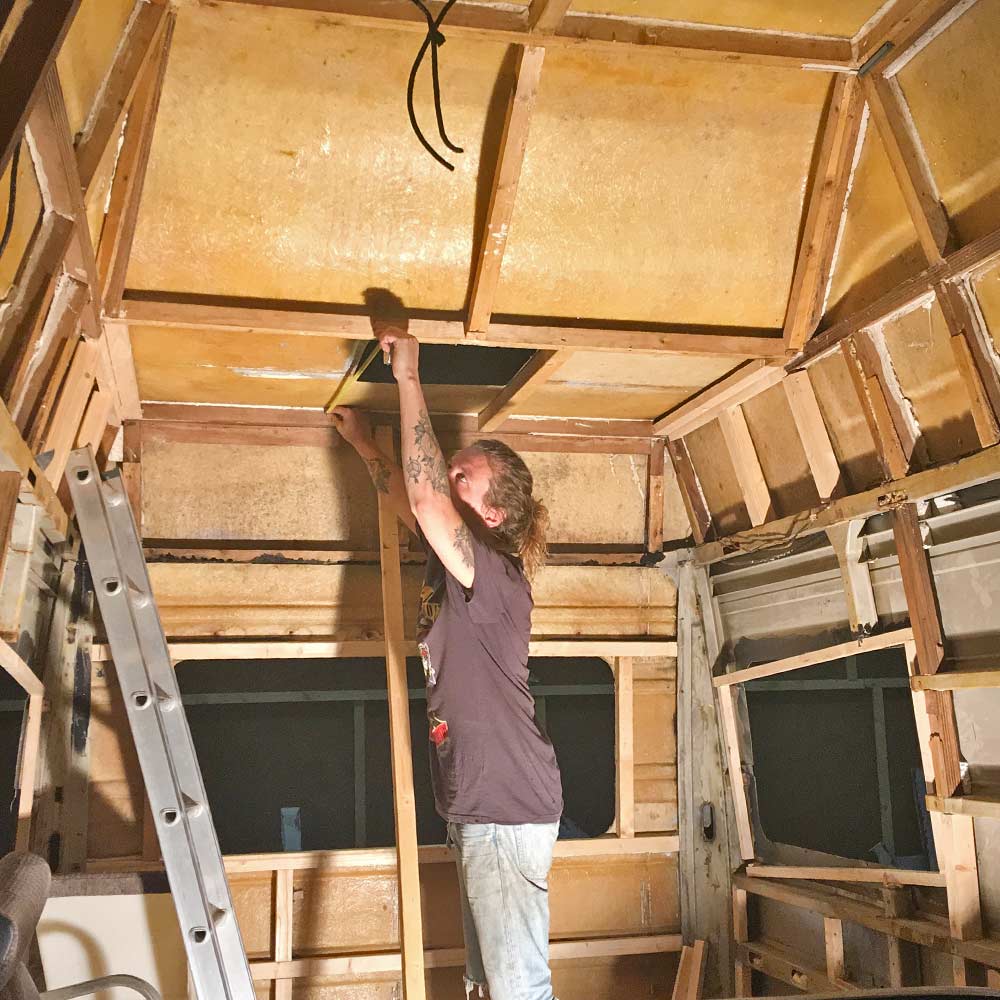 Do you miss more space or are you happy as it is?

If anything, I noticed that I have more space then I use still. Living in a van makes you live outside much more, until it gets cold though…

How long did you worked on your Hippiebus before you started your trip?

I started the build in June, but really got to work in October. I worked furiously during the winter until late every night.

And in the weekends I was working fulltime on the van. I worked like this until March, when I figured the van was in a good enough shape to start traveling.

I continued finishing the van while traveling for the first month. 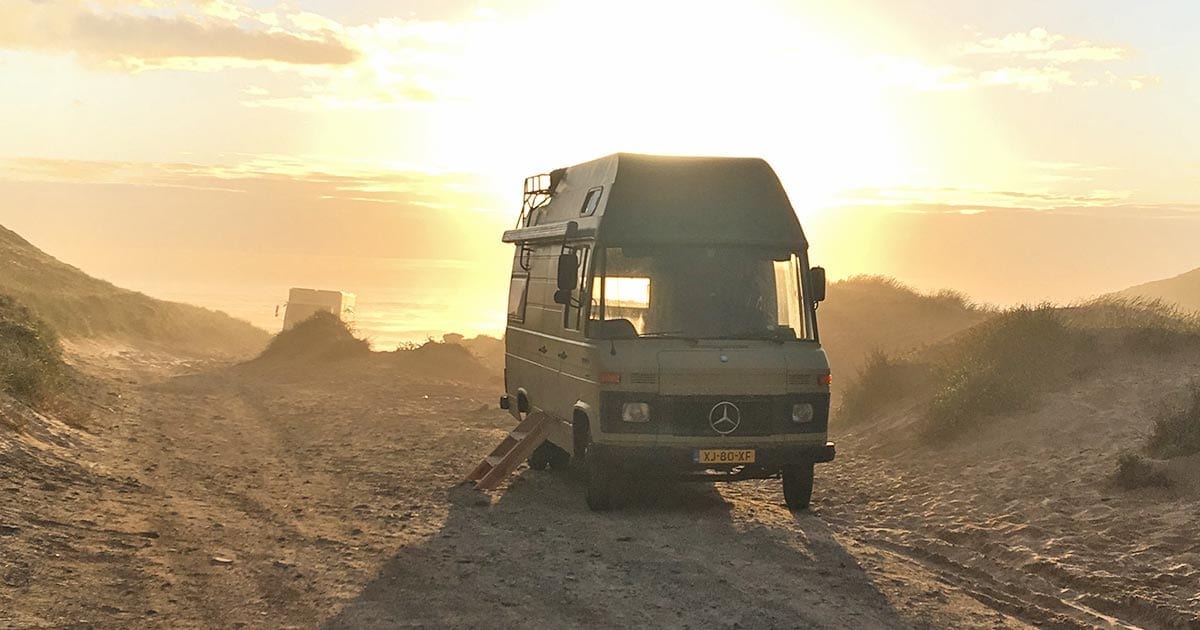 Tell me like 2 – 3 things that you really love about traveling with a camper.

The best feeling about traveling in a camper is that you can always stop and make a coffee or go to bed. It is really nice to have everything you own with you at all time.

When I’m in a traffic jam, I can just stop and do whatever I would like to do, as if I’m at home. Where ever I go, I’m always home.

Another thing I really like about living in a camper is the friendly faces everywhere. Everywhere I go, people wave and smile.

I think it is because my hippiebus reminds people of how vehicles used to look and with my extra high roof, the van looks kinda dorky. And since I am really slow, I let people pass me as much as possible.

So I get a lot of thumbs up from other drivers. Driving this vehicle puts a smile on my face every time.

Which countries did you travel to with your Hippiebus? Which one was your favorite by now?

I traveled only the west of Europe with this van since I finished it only half a year ago.

So that means the Netherlands, Germany, Belgium, Luxembourg, France, Spain and Portugal.

I didn’t have any problems about my camper lifestyle so far. I did find out that Portugal is very camper friendly as well as France, where they have special camper spots with necessities everywhere.

On the internet however, people are way more faster to judge, or be negative, then in real life. 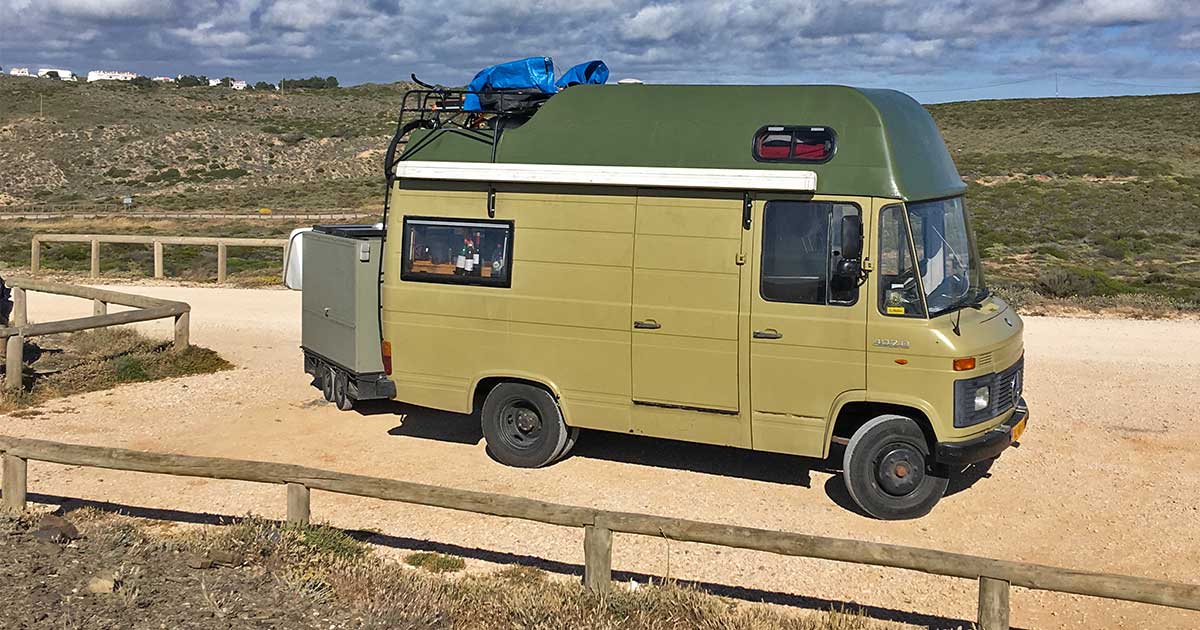 What was the longest Road at one piece you drove with your vehicle?

The longest road in one trip would be my trip from the Netherlands to Portugal and back, which took me about 2,5 months.

I do meet other vanlifers, though it is not as easy a I thought it would be. When the weather is bad, everyone will be in their own van, instead of living outside.

That makes it way harder to connect with people. But when the weather is good, the vanlifers go outside and enjoy the social possibilities.

The thing that annoys me from living in a van is the fact that I always forget to clean up something before I drive off.

So at the first roundabout I encounter, I hear the thing I forgot, smashing against the wall or floor and I have to stop and clean the whole thing.

Not everything is perfect, what would you change about your vehicle?

There is not much we would change. We really did research and think through the design and are happy with how it turned out.

There are stil some issues that I need to change/fix. My tank is way to small, so I have to stop for gas about every 250/300 km.

And my roof edge (where the top sits on) is rotten on some places and needs fixing.

But I am still looking for a garage which can help me do this. 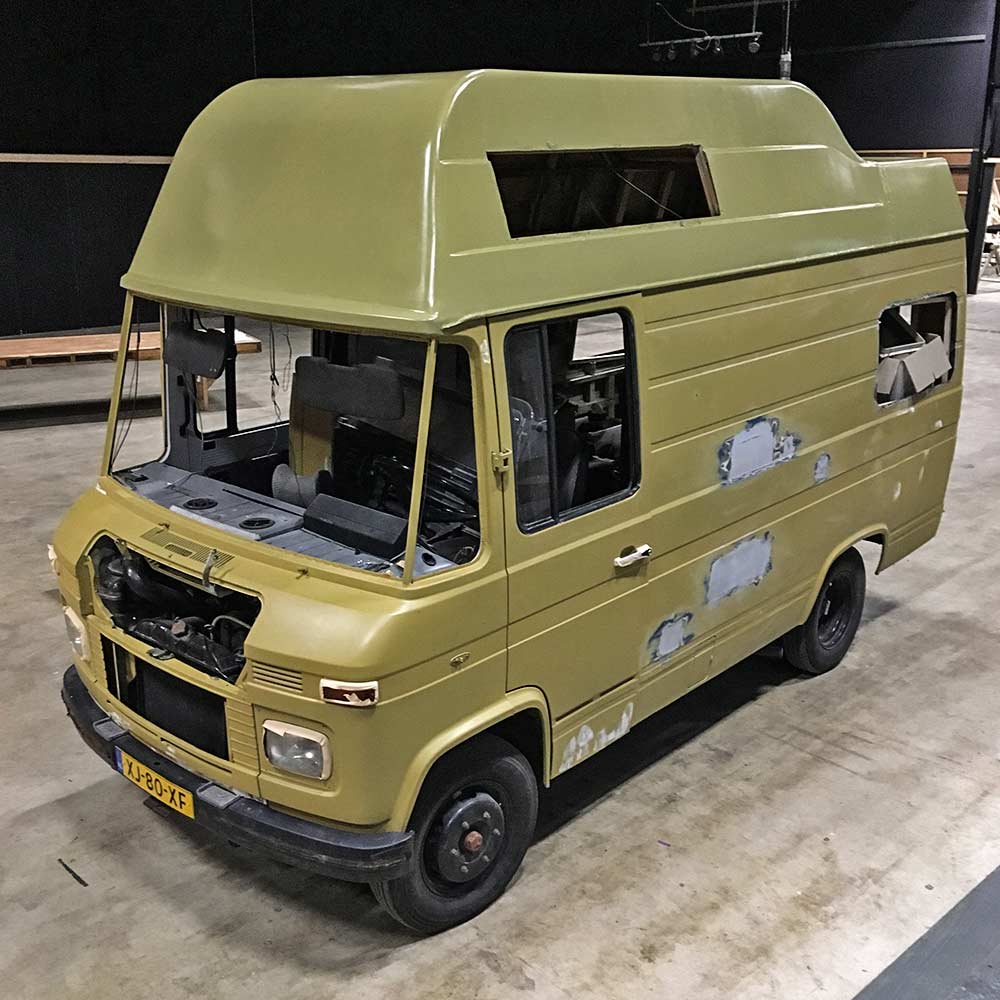 So, if not your Hippiebus – which one would you choose if you could and why?

I would go for a Luton Box van, since it cant rust out (the living area) and all the walls are straight. But my dream van is a Unimog, since I absolutely love to drive offroad.

I want to drive to India (or maybe further to Australia) somewhere in the next few years and having a 4×4 vehicle would definitely help with the ease of the trip.

I had a dog until recently, so that made it impossible for me to tattoo from the van (not hygienic). But now my dog is not traveling with me anymore.

I am building a little tattoo corner, so that I can earn some money while traveling. I like to work in a tattoo studio more though, since it gives me more regularity.

Living „free“ without the need to be somewhere on time is really nice, but after a couple of months it makes me feel useless.

Having a working schedule helps me feel like I am participating in the world and pushing me to be a better tattoo artist.

But besides tattooing I also sell my art and I do commissioned work. I can draw everywhere, so that also helps putting fuel in my van.

My next destination is Hamburg and Berlin. I’m going to visit people I met along the way and I hope to find a tattoo shop in Berlin where I can work.

After that, I have no idea. Maybe I will go back to Portugal (I absolutely love this country) or maybe I will stay in Berlin for a couple of months/years. The only plan I have is to become the best (tattoo) artist I can be. Anything is possible, I feel at home everywhere.

Want to join the discussion?
Feel free to contribute!